Let’s face the facts: some men cheat. Some simply desire to cheat but don’t dare to go through with it, some do it in secrecy hoping that the truth will never be revealed, and some even openly brag about being unfaithful and share all the details with their buddies. 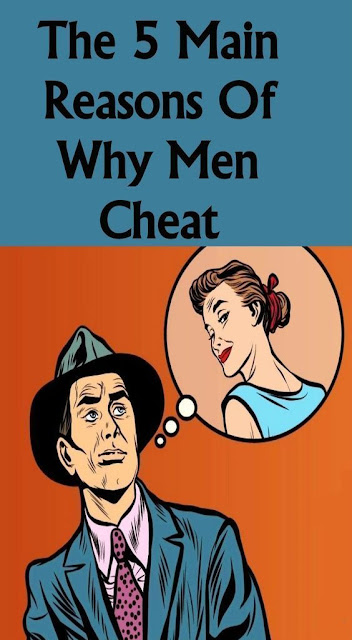 There certainly isn’t a single reason for all these infidelity issues and we’re definitely not looking for excuses – it surely is wrong and should be avoided as you’re fully aware that your precious relationship or marriage can be at stake, but maybe some insight into what really happens behind the scenes can be helpful to understand how it all happens and prevent future issues if possible. So without any further ado, let’s take a look at the 5 main reasons men cheat!

1. SOME MEN CHEAT BECAUSE THEY SIMPLY CRAVE FOR VARIED SEXUAL LIFE
They never really meant to be monogamous in the first place, but they just couldn’t or didn’t want to admit it. It’s not all about consciousness and moral behavior, don’t blame the cheater’s mind for everything – biology has something to do with it as well. Men have evolved the desire to be with different women in order to try to create a large offspring, it’s been that way for centuries and it’s definitely true, but we people have the power to choose whether to succumb to temptations or try to fight against them. Instincts are and will always be there, no question about it, but the same thing applies to the ability to think in abstract terms our species has been blessed with. The next time you feel inclined to sin, hypothetical questions might dissuade you from making one of the worst decisions in your life. Try asking yourself: “If I cheat and get discovered, what do I risk to lose?” If the answer happens to be “a lot”, brush those urges off and go on with your old life, or you might regret it big time – the choice is yours.

2. SOME MEN CHEAT BECAUSE THEY ARE UNHAPPY WITH THEIR LIFE ROUTINE
Lives of average men aren’t extremely exciting most of the time. They work long hours and spend major parts of their days away from home, their mates are usually exhausted with their own job, kids and the housework and in the evenings the usual communication is based only on practical things and problems to solve. Once they get stuck in the daily routine, there is usually little to no room for sex and romance and this isn’t exactly what men imagined while giving those famous marriage vows: unfortunately, this is how that life “until death do us apart” actually looks like. It’s not so much about their mate’s looks either, it’s about searching for a way out of their rut and experiencing a thrilling adventure. Unfortunately, this sort of adventure is fantastic only for as long as you dream about it – once it becomes reality, there isn’t much else to do than to realize that nothing has essentially changed, which can lead to depression and deeper dissatisfaction with life. True change starts inside of you and it has to do with your approach to life, open communication with your partner and willingness to work on what you already have. Remember why you decided to be with your partner in the first place, there was surely some very good reason for such decision – don’t blow it up because you’re too lazy to work on your relationship.

3. SOME MEN CHEAT BECAUSE THEY HAVE MANY CHANCES
It doesn’t have to be increased libido or boredom, things at home can be totally fine but some men still cheat. If a guy is young, handsome, successful, well off and/or famous as well, chances are very high that the great majority of women he encounters on the daily basis will want to have him for themselves, too. A woman who is in a relationship with such man has to be aware that she got involved with someone truly appealing – if he’s very attractive to her, there is no way to make him unattractive to the rest of female population out there. He’ll be tempted and not just from time to time, so the math is pretty simple here – the more you’re tempted, the higher gets the probability that you’ll go astray. Partners of such men should simply relax, enjoy the benefits of such relationship and try to be the best version of what attracted these men to them in the first place. As for these high-profile guys, what we’ve already mentioned applies here as well – keep somewhere close a reminder of why your mate is precious to you and try not to destroy what you have because of some completely irrelevant flirts.

4. SOME MEN CHEAT BECAUSE IT DOESN’T FEEL WRONG
The statistics say that the majority of men feel guilty if they cheat. It means that in spite of being ethical and conscious of doing something wrong they will still wander at least on occasional basis, but the guilt will prevent them from making a habit of doing it. However, some men cheat because they simply don’t think there is something wrong about it. They simply follow their natural instincts and they’ll usually give you the famous excuse: “It was just sex, it has nothing to do with love.” In many cases this is true – they do love their mates, their children and their family life, they even happen to be good and reliable partners and parents, but they simply follow their drive. It’s not cheating to them, it’s like having temporary delicious treats before getting back to their usual duties. These guys don’t see why they should be making sacrifices and they don’t think that their behavior endangers anybody in their surroundings, so they can be completely surprised by the disapproval and rejection if they get discovered. It may not feel wrong, but trust us – it IS wrong. Other people’s feelings count as well, you can’t always put yourself in front of everybody and everything else without a price to pay.

5. SOME MEN CHEAT BECAUSE THEY LACK UNDERSTANDING AND APPROVAL AT HOME
It’s been a tough day, so when he gets back home the last thing he needs is his wife’s constant nagging about almost everything he’s either done or hasn’t done in his entire life. If a man feels that he doesn’t get approval for his actions or ideas or that he doesn’t have understanding when he needs it the most, he’ll feel inclined to search it elsewhere. It is not said that he’ll find what he is looking for at some other place, but we all try to make things better if possible. Cheating however won’t improve the situation, because if your other half learns about the affairs, nagging can only get unbearable and make life even worse. Instead of putting all the blame on your wife and choosing infidelity as the solution to your problems, ask yourself in an honest way if you’re truly doing everything right. If you’re complaining most of the time as well, provoking your mate or seeking approval for crazy ideas or impossible things, take your share of the blame and don’t have double standards. Sit together and try to work things out in a mature and constructive way if your relationship matters. Quick fixes in the form of instant pleasure can only bring disappointment in the long run, it’s your responsibility to do the homework and sort out your life.