Home / Unlabelled / If You Pick Your Nose, You Should Probably Stop Now. This Is How Dangerous It Can Be

If You Pick Your Nose, You Should Probably Stop Now. This Is How Dangerous It Can Be

We all do it from time to time. We feel an itch or scratch and the next thing we know we’re sticking our fingers up our noses. But did it ever occur to you that it might actually be dangerous? Read on to find out why you might want to think twice before going after that next booger. 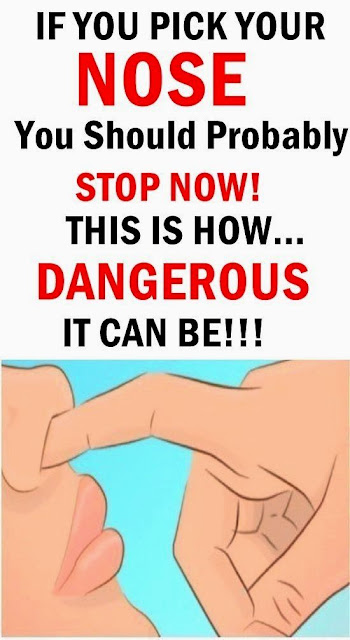 Dangerous and even multiresistant bacteria like Staphylococcus aureus can get into your body. These germs live in your sinuses and you “feed” them every time you stick your finger in your nose.

Another complication: The nasal walls get irritated and can become chronically infected. Nose picking can injure the sensitive mucous membrane and cause bleeding.

Scabbing builds up and makes you want to scratch even more. This is how the viruses, bacteria, and fungi that are under your fingernails get into your bloodstream and make you sick.

Nose bleeds can be very severe because there are five arteries that run through the lower part of the nose! The sensitive mucous membrane in the nose can take several weeks to heal properly.

Who would have thought that such a harmless habit could be so bad for our health? So the next time you get the urge to do some booger mining, it might be better to reach for a tissue and blow your nose instead.