18 Signs Of Fibromyalgia You Need To Be Aware Of

The chronic condition of fibromyalgia is infamous for triggering widespread pain around the body. Doctors often get confused while diagnosing fibromyalgia as pain is a common trait in a horde of other ailments. This is why it takes about five years in average for patients to benefit out of a proper treatment. 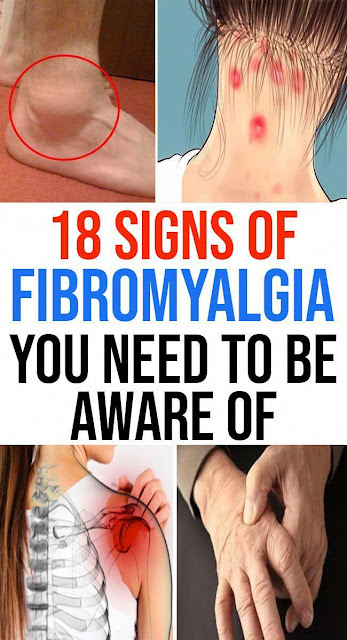 It can be easy for your doctor to diagnose your ailment if you can present him with a clear shot of the location and type of pain. Faster diagnosis leads to faster initiation of treatment which in turn can relieve your symptoms seamlessly. Today we are going to take a look at some distinct symptoms of fibromyalgia which can assist in its early diagnosis.

This common symptom of fibromyalgia can be focused in various places or concentrated in an unexplained region. The pain intensity also tends to vary and get triggered by factors such as physical fatigue, stress, anxiety, humid/cold weather etc.

Fibromyalgia is a mixture of skeletal and muscular pain. People suffering from the same have reported extreme stiffness during morning and evening which paves the path for a little relief as the day progresses.

External factors such as sleep level, activities undertaken and general fatigue can also influence the level of stiffness to a great extent. Although the pain does not come off as excruciating to cause immobility, it surely causes inconvenience.

Pain tags along a general sense of tiredness which simply refuses to vanish away even after taking adequate amount of rest.

The 18 symmetrical tender points of our body located above and below the waist assist doctors in diagnosing fibromyalgia. People suffering from the same have reported increased tenderness in these areas prior to the occurrence of a flare up.

Several patients have reported instances of severe migraine pain which can even extend down the body towards the neck, shoulders and ultimately upper back. Environmental stimuli such as powerful smells, loud sounds and bright lights can trigger these headaches which can last pretty long.

Women suffering from fibromyalgia tend to experience more pain during menstruation along with low back pain and cramping. They can also experience heaviness, changes in cycle duration and irregular menstrual cycles.

Painful fibromyalgia flare-ups are infamous for causing post-traumatic stress disorder type symptoms like hypervigilance and inability to relax. Various other forms of health issues can be caused by such high level of constant stress.

Patients have reported high level of anxiety while waiting for an upcoming painful flare-up. Certain patients also live in constant fear of becoming incapacitated by a flare-up while leaving the house. They can also succumb to a panic attack if these fibro symptoms show up while being far away from home.

Fibro patients have reported having difficulty in maintaining basic coordination and balancing things upright. Although fatigue can serve as a potent cause of the same, it can even be triggered by fibromyalgia.

An autonomic brokenness within the hypothalamus leads to an increment of sweating. This hikes up the level of discomfort amongst people suffering from fibromyalgia.

Chronic pain even causes patients to become short-tempered and easily irritable. Fibro patients feel stronger emotional reactions that their peers and have less control towards its expression. This sensitivity holds true for both positive and negative emotions alike.

Everyday proceedings of fibromyalgia sufferers get affected rhetorically by mood swings. These sudden alterations in mood swings are often inexplicable and can bring upon a devastating effect on the personal and professional life of a person.

Fibro fog is accompanied by an array of cognitive difficulties such as a blurry or hazy feel, lack of motivation, getting easily confused, difficulty in maintaining the focus level over long spans of time and problem in paying attention.

High stress, overstimulation, medication effect and lack of sleep are the biggest causes of fibro fog. Several patients have complained about the frustrating symptoms of fibro fog to seem like as if they are consuming cold medicine.

Fibromyalgia patients have reported increased sensitivity to touch, loud noises, cold, odours, certain foods, medications and bright lights. Instances are not rare when these people flinch in pain or surprise by even the slightest touch.

Their sensitive and hyper-aware nerve endings are triggered even by the slightest stimulation caused by tags or seams in clothing. In spite of this, the fibromyalgia patients reach out for a woollen during the sunniest days’ courtesy their increased sensitivity to cold.

Fibromyalgia is known to trigger central sensitisation which makes our body overly sensitive to small things which normally wouldn’t hurt.

People suffering from fibromyalgia regularly report instances of nausea and upset stomachs. Those having irritable bowel syndrome further experience constipation. Fibromyalgia has also been linked with painful bladder syndrome or interstitial cystitis acting as a nail on the coffin.

Fibromyalgia ushers in a different set of symptoms for different people. The main reason of this difference is the manifestation of this ailment in various ways and also the general healthcare routine followed by an individual.