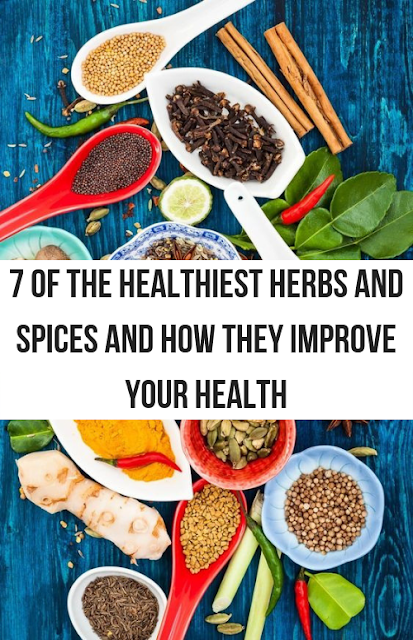 Herbs and spices not only enrich the taste of food, but they also give us health benefits. The healing power of some of them was used thousands of years ago. Modern scientific studies prove that the claims about the positive effect of spices and herbs on health are not just empty stories.

Add half teaspoon cinnamon in oatmeal or season the milk and coffee with a little cinnamon. Cinnamon is so tasty that you would never cross your mind that it possesses all that great healing power. Besides, it regulates blood sugar levels in diabetics, the intake of a half or a quarter teaspoon of cinnamon twice a day reduces triglycerides and cholesterol levels by about 30%.
Cinnamon has anti-inflammatory and antibacterial characteristics and is believed that effectively fights with E. coli and other bacteria. For some people cinnamon reduces unpleasant symptoms of heartburn. Everyday use improves health.

GINGER
The biggest benefits: anti-nausea and abdominal pain, relieves the symptoms of arthritis

Several studies have shown that ginger reduces pain and swelling in people who suffer from arthritis. Ginger is especially useful for reducing nausea and controlling the vomit instinct. Ginger can eliminate stomach problems and reduces headaches caused by migraine.

SAGE
The biggest benefits: against sore throats, to preserve memory

Boil your sage tea if you have stomach problems or if you have dry and sore throat. Sage tea reduces sore throat. Preliminary researches suggest that Sage can ease the symptoms of Alzheimer’s disease. In other research students who received sage extract before the exam scored significantly better on memory test, and they also had positive effect in their mood.

ROSEMARY
The biggest benefits: it improves concentration and brain function

Rosemary is a powerful antioxidant that increases blood flow to the brain and protects the brain from free radicals, thereby decreases the risk of stroke and diseases like Alzheimer’s. This herb increases wakefulness and concentration which leads to more effective performance of tasks that are related to memory. Its also great for marinating meat and there is a good reason for it. It contains acids and substances that fight bacteria and prevent meat from spoiling and make cooked meat healthier. Rosemary also stimulates the immune system, improves circulation and improves food digestion.

PARSLEY
The biggest benefits: for a strong immunity, prevention of heart attack.

Parsley is incredibly rich source of vitamins A and C; it helps to strengthen the immune system and is especially useful in protecting the cardiovascular system. Parsley tea is also used for relief of symptoms in cases of urinary tract infection. Chewing parsley removes bad breath, parsley can be used external for bruises.

Turmeric is a spice that gives curry yellow color, mostly used in Indian cuisine and medicine. In recent years, studies increasingly confirm its power to fight against cancer. It consists substances that reduce the growth of tumors. Studies show that this spice protects against colon cancer and melanoma, the deadliest form of skin cancer.
7 of the healthiest herbs and spices and how they improve your health 2019-01-10T10:53:00-08:00 Rating: 4.5 Diposkan Oleh: Zeni Anjani